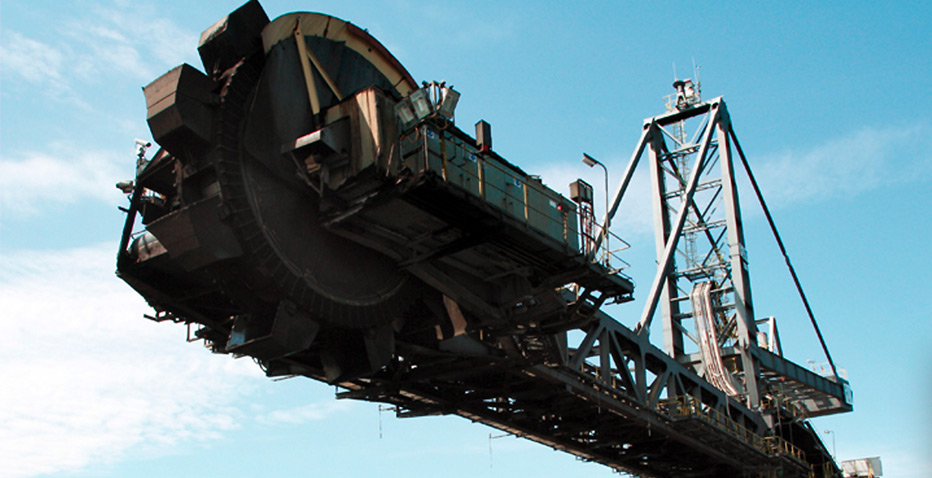 Gigantic - the Reichwalde brown coal open-cast mine with its conveyor bridge and a belt system measuring 13.5 kilometres in length. The LÜTZE wiring system LSC is used in this application. Which advantages can the space-saving system exploit in the face of such huge dimensions? The operator Vattenfall provides information.

Approximately 366 million tonnes of raw lignite are hidden in the 6 to 14-metre thick coal layer in the Saxonian Reichwalde open-cast mine. From this deposit, the electricity producer Vattenfall supplies its Boxberg power plant: This supply is forecast to continue until 2050, together with the Nochten open-cast mine. The link between the coal mine and the power plant is an impressive 13.5 kilometres long conveyor belt system which transports approximately 6000 tonnes of raw lignite per hour.

In the drive and deflection stations of the belt system (see photo 3), LÜTZE LSC-B type frames are used. Now the question arises as to what advantages could be exploited by the space-saving, compact LSC wiring system in the face of such a huge system, which can hardly be suffering from lack of space?  Karsten Kunaschk, electrical engineer at the operator Vattenfall Europe Mining AG, explains: "The aisle widths and the operator paths are narrow. For this reason, we are attempting to keep the cabinet depths as small as possible". So LSC is to be used for a major project because it can make itself so small? Couldn't the problem have been solved using mounting plates? Kunaschk explains: "The space-saving qualities were only one important reason for the decision. What is most important to us is the appreciably higher energy efficiency, as the cable ducts for the mounting plate are not required in this application".

On the LSC system, of course, the mounting and wiring planes lie separately on the front and rear sides of the LSC frame. In this way, the air can flow almost unhindered past modules and wires - and quickly removes dissipated heat. No transverse running cable duct hinders air circulation. This means that the LSC system by LÜTZE optimises the cooling performance, but above all lowers the standstill times and the costs. The space savings of 30 to 40 percent in the control cabinet result from the compact construction. In spite of this, everything can be accessed from the front, without rear access proving necessary. Using the newly-introduced LÜTZE system LSC AirSTREAM, the installation depth could be reduced still further, allowing the air circulation to be further optimised.

Coal had already been extracted from 1987 to 1999 in the Reichwalde open-cast mine owned by Vattenfall Europe Mining AG in the Lausitz (Saxonia). After an extraction stop of eight years, and the takeover by the Vattenfall power producers, work was carried out until 2010 on the comprehensive modernisation of all devices and on the recommissioning of the open-cast mine. Amongst other things, the overburden conveyor bridge "F60" was renewed with three drops (see photo 5), and the gigantic belt system (see photo 1) was installed at the power plant coal storage yard (see photos 2 and 4). Until 1999, the coal was transported from the Reichwalde open-cast mine to the Boxberg power plant on trains.

In addition, the entire energy supply for the open-cast mine was renewed.
With the recommissioning of open-cast mining operations and the commissioning of the newly-constructed block "R" at Boxberg power plant, the power site "Saxonian Lausitz" received an important building block for its economic future. In this way, not only the fuel supply for the Boxberg power plant and the associated numerous workplaces, many suppliers and service providers are secured for decades to come. This modern open-cast mine also creates a good basis for the environmentally-friendly and economic usage of our native coal deposits.

Fossil brown coal represents security: the turnaround in energy policy has only just begun, and is still in its early stages. As long as the exploitation of regenerative energies, particulary those from wind power plants continues to suffer setbacks through fluctuations and regional disputes, it will be unable to guarantee a reliable power supply for the German economy and consumers.

It would therefore be impossible to do without a stable basic supply of brown coal energy.
The Vattenfall Europe Mining AG is a company belonging to Vattenfall Europe AG, and is responsible for the Open-cast Mine division there. The fifth-largest power producer and leading producer of heat in Europe conveys 60 million tonnes of brown coal per year, and turns them into energy in the Jänschwalde, Schwarze Pumpe and Boxberg power plants. This last plant supplies up to 15.6 billion kW hours of power per year.
In 2011, a further power plant block with a gross capacity of 675 MW was connected to the grid.

We use cookies to offer you an optimum website experiences. This includes cookies that are required to operate the website and control our commercial company goals, and those that are used purely for anonymous statistical purposes. You can decide which categories you want to allow. For further information please visit You can revoke your consent to the use of cookies at any time in the cookie settings.