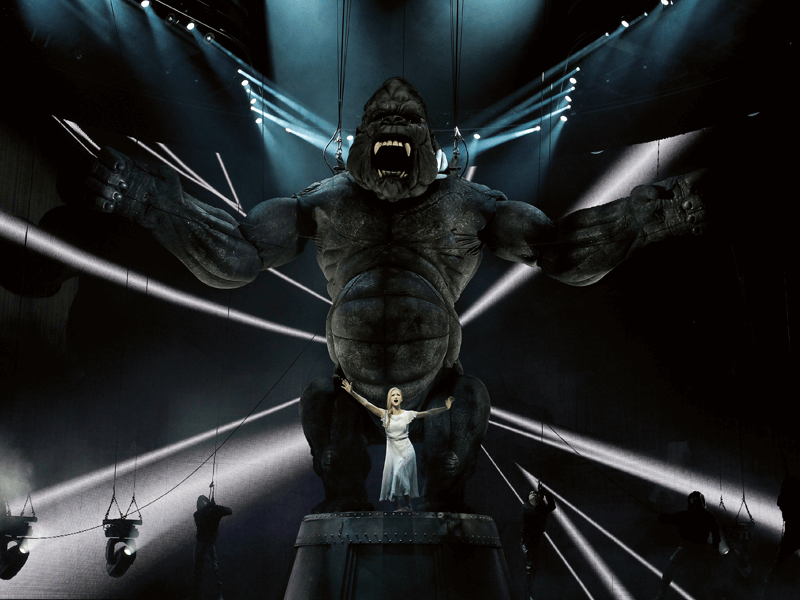 The rubber and rabbit fur model seen hanging off the Empire State Building swatting bi-planes in the original film was 24 inches tall. The modern stage incarnation of Kong stands six meters high and weighs more than a ton. Five years in the making, the King Kong musical, produced by Australia’s Global Creatures, took to the stage in 2013 at Melbourne, Australia’s Regent Theatre.

Lutze Limited worked closely with Stage Technologies in the UK to ensure the connectivity for the ground‐breaking automation system that controls the enormous silverback was up to the task. The automation package included over 12 tons of steelwork, motors, winches, and over 3,000 meters of electrical wiring, crammed inside the puppet's steel and aluminium XY frame, powering 16 microprocessors and 15 servo motors which moved Kong's eyes, eyebrows and eyelids, nose, lips, jaw, neck and shoulders. He also made sounds - a vital part of making his movements appear realistic.

Inside the XY frame, the Siemens drive equipment, was served by very tightly routed cable and drag chains, meaning the design of the cable assemblies was critical. Lutze Superflex PUR cables were chosen for servo and control functions, and complete cable assemblies were part of the supply requirements.

Multiple lines bridled down to each shoulder, giving the operators independent up and down movement and the ability to manoeuvre Kong forwards and backwards within the space of the apparatus. Optional lines could also be connected to Kong’s back or front to allow the body to be rolled in either direction.

The core chassis of Kong was one of the company’s ‘simpler’ understructures, however mixing the anomalies of a gorilla’s anatomy with the principles of engineering, which loves straight lines and good planes and marrying the mechanical functions of interior with the organic-looking Lycra and latex exterior was one of the big challenges of animatronics.

On top of the chassis was a layer of inflatables - air powered muscles - which gave Kong a lightweight body form. Over the top were a series of highly sculptured muscle bags that stretched and contracted to give the appearance of a whole anatomy beneath.
For the first time these bags were left exposed rather than being hidden, a deliberate move to emphasise Kong’s muscularity and power - allowing him to furiously pound the floor without causing a minor earthquake.

King Kong was a break‐through in automation control, allowing the puppeteering of large scenic elements whilst retaining the full control and safety systems within the automation system.

Overall, it was an extraordinary collaboration of engineering and software expertise with sculptors, artists, musicians and actors creating a unique spectacle.